“It’s Like The Young Love We Both Hoped For…” 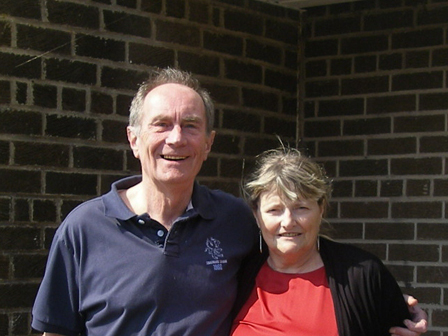 It’s time for another success story!

Last week we received a lovely email from John. John met Suzanne on Just Retired Singles, this is his story…

“I saw Suzanne on Just Retired Singles about mid-January this year and as I thought she looked good, had an appealing profile and lived very close, so I made her a favourite. This provoked an interesting response in the form of a message that said “Why favourite?”  This was a new approach so I sent a message back saying “Why not!“. We exchanged a couple more messages and agreed to meet at a well known location which had country walks and a cafe. We met at the appointed place and time and there was an immediate frisson between us, so we walked a while – didn’t hold hands – and went for a coffee afterwards. During all this time we talked and talked so, by the time we parted, without a kiss or even exchanging phone numbers, we knew there was something special happening, which is why I didn’t push for anything more, not even Suzanne’s phone number. The attraction was immediate and I didn’t want to push too hard and maybe scare her off.

I had to go away for a few days and when I returned I mailed Suzanne, told her how I felt about her and she said the same about me. She visited me at home the following day, we sat and talked, drank tea, talked some more and realised that this was the start of something very different from the expectations we both had about internet dating. By the time she went home I think we both realised that we had found in each other a feeling which was difficult to quantify or ignore so we met a few times more, sometimes at her place, sometimes at mine, but always with a deeper commitment after each date. By the end of that week I think we were lost to anybody else, totally involved and very happy with the way things were going. The interesting thing is that we both feel the time was right for us to meet. Any earlier or later and it might not have worked but that point in time was the pre-ordained time for us to meet.

That was 10 weeks ago now that we first met and we have spent most our time together getting to know one another, our quirks and foibles, likes and dislikes, hopes and expectations, and even very early on, the commitment we felt ready to make to each other. We’ve been out three or four times on our own – we each have a dog so it’s difficult to spend more than a few hours together, but we find that those few hours, added to the numerous times we’ve visited each other’s home over the weeks, have shown us that we now know that we want to be together. We are now looking for a place to rent, somewhere to call “ours“. We are able to help each other bury the bits of the past we both want to forget and, despite our ages – Suzanne is 60 and I’m 68 – we feel we are re-born and are starting out on life’s journey again, but with the knowledge that we know what we want and are finding it in each other.

It’s like the young love we have both hoped for and sought all our lives.

I, for one, never believed I would feel wanted and needed as much as I do with Suzanne. I have always been a romantic at heart but have never believed in love at first sight, having drifted into my previous marriages  – but I do now though, completely! The hours we spend together, just sitting, talking, holding hands or cuddling, relaxing in each others arms, building the blocks that go to make a successful relationship, just seem to whizz by and all too soon it’s time to part for a couple of days. Her shift-work pattern doesn’t allow a regular date so we catch as much as we can when we can but we know that with the changes we are making, the adjustments we are both making, our life together will be one of happiness, contentment and deep, deep love. I am looking forward to spending the rest of my time on this twig in love with, and being loved by, Suzanne. We will get married later this year when we are more settled, wherever we are.

To find my soul-mate at my time of life is just the most wonderful feeling so I say to others – don’t give up. It doesn’t matter how many frogs you meet, somewhere out there, and maybe closer than you think, is that special someone who makes your life complete and worthwhile so just go for it.

I wish all your members success in their search for love, or whatever they seek, and never give up trying. It took me nearly a year to find Suzanne, having registered with various dating sites, but we would never have met without the internet.

Thank you very much, all of you at Just Retired Singles.  You have been able to make me very happy when I thought that would not happen again.

We are so happy for John and Suzanne and wish them all the best for the future!