3 Dates 3 Months challenger Morag (aka Mo’adore)  didn’t meet her Mr. Right speed dating, and so the search continues. For her second challenge, she headed for a local vegan restaurant in search of meat-free love. Read on to find out how she got on… 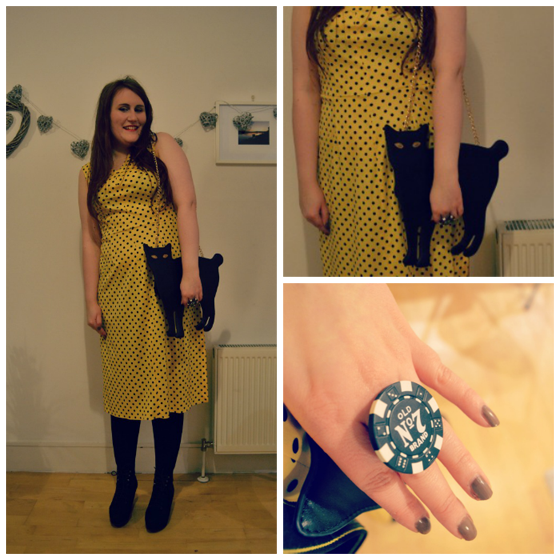 What I wore for this challenge:

Picture taken by someone else prior to my no-selfie declaration for lent.

When I made the decision to become a vegetarian three years ago I didn’t quite realise my dating life would be impacted. I knew I couldn’t be taken on a date to a steak house or gifted gummy love hearts for valentine’s day; but I didn’t quite anticipate how many guys would be put off by my meat-free lifestyle.

To put it out there: I’d date a meat eater. Yes a veggie dude would be great but it’s not a deal breaker if that special someone likes meat and I wouldn’t try to change that. But quite a few of the guys I’ve dated have made a big deal about it.

Some gems have included:

– Vegetarianism isn’t natural (ex-boyfriend prior to my transition, which happened two months after our split)
– Do you eat eggs? But it could have been a chicken? Vegetarians shouldn’t eat eggs!!!
– Oh, that might be a problem ’cause I do eat meat (to which I drunkenly replied ‘oh that’s okay cause men never are veggie anyway‘)
– Do you mind if I eat meat in front of you?
– Do you eat fish?

Thus the idea holding out for a fellow vegetarian became attractive. Therefore I decided my second method for finding a date for my JustSingles.com challenge would involve something relating to my plant-based diet.

And I chose the plant-based version of a common way people try to meet that someone to spend their life with (or something a bit more, ahem, casual) – I went to a bar which is also a vegan restaurant during the day (The Flying Duck in Glasgow for particulars).

And my verdict on this method? It is just the same as trying to meet someone in any other random bar.

Admittedly I had forgotten how difficult it is to sashay over to a guy in a nightclub. Or I hadn’t even realised how scary it would be to approach a complete stranger. Whilst at university I would praise my own chatting-up skills and wasn’t afraid to make the ‘first move‘ but when you’re studying in a city as small as Dundee and you’re one of these annoying extra-curricular kids with that socially packed calender who also lived in halls for two years, no matter what nightclub or bar you go to six (or even two) degrees of separation will always be in play.

But fast track to a big city like Glasgow and you only know about 20 people and 3 out of the 4 people you’re out with aren’t even G-dwellers.

An observation I’ve made about male veggies for a while: they tend to prefer other men. It’s an official statistic that the majority of vegetarians in the UK are women and whilst I don’t know if there’s any official statistics from the Home Office on the sexual orientation of vegetarians, it has nearly always been true in my experience (one of the pals I was with is a gay male veggie but in a long term relationship, otherwise I would have handed this challenge over to him).

After spotting a few cute guys…I quickly spotted their boyfriends (which happens in a almost every bar…cause, you know, I like guys with good hair who own lipbalm). (I also don’t know if they were actually veggie, but you get my point…).

So…yeah. Despite having met guys in bars before and having met a lot of my BFF’s through my favourite clubs and concerts, going to clubs (even small relaxed niche clubs) isn’t the best way to meet people unless you’re a socialite with loads of acquaintances in the venue.

To read more from Morag, check out her blog Mo’adore. You’ll also find her on Twitter tweeting all things veggie, beauty & fashion!