23 year old Morag (otherwise known as Mo’adore) spent Valentine’s Day at a local speed dating event. How did she get on? Read on to find out… 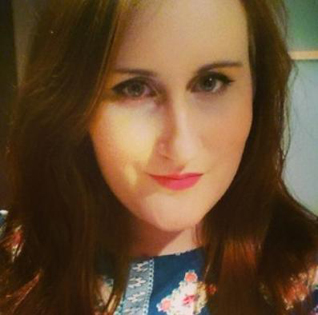 I’m a long term singleton who has clocked over three years on the dating market, so when JustSingles got in contact with me asking if I wanted to take part in their #3dates3mths campaign I was all ‘why the hell not?‘ Admittedly being single isn’t something that keeps me up on my spoonless nights (“better to be single than settle” is my motto) however it’s been a *cough* while since I’ve even dated someone casually so I decided this was worth taking part in to get me ‘back in the game‘ (I might edit that phrase later).

I know some people have seen the hashtag coyly popping up on Twitter and have been urging me to get my posts up, but the jist for anyone who is unsure is that I have to try three different ways to find a date over the course of three months. One of them using JustSingles dating site itself and the other two being of my own choosing.

I did originally decided that a ‘shag tag‘ or ‘traffic light party‘ would be a terrific way to meet a nice, respectable single guy, but Glasgow was looking low on these events over the valentines period so I chose speed dating – for little other reason than both The Cathouse and The Garage were running it on v-day.

And naturally I chose the Catty. I do love myself a bit of The Garage but I like my guys tattooed, a bit rougher, wearing vans and packaged up with that “I spent my youth skateboarding round the back of shopping centres” vibe.

Even if all my workmates were like: “Catty? Morag, really?” 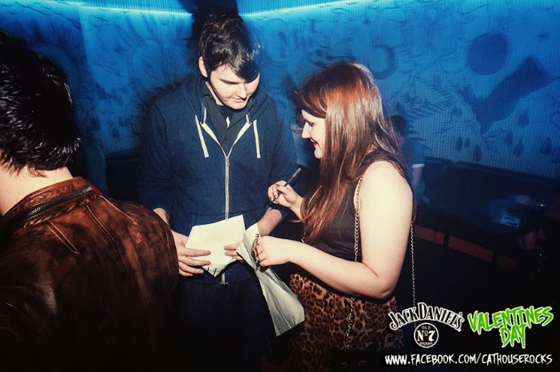 You might recall that I have been speed-dating before (and another time after that if you include last year’s Valentine’s blogger meet-up), and whilst I realised the Cathouse wouldn’t be of the same set-up (read: not held in my old student union where I knew most of the guys coming round) I was met with a very ‘good time‘ speed dating, as in it wasn’t really all that official. Instead of numbered tables the marketing manager came out of the DJ booth and handed out pieces of paper and just told us to mingle.

With only about 6 people of each sex taking part it didn’t take long for the mingling to concede and we handed back our papers. I never received mine back and remain unaware if the guy who I marked 10/10 because we shared a great moment air guitaring to MeatLoaf (because after a few rums this is become a very important quality in a potential boyfriend) shared my fondness.

However, some of things I have learnt about speed dating, from both this event and my previous flirt with it:

Choose your venue carefully – I did realise ‘Valentine’s Day speed dating at the Cathouse‘ wouldn’t be a serious affair but all the speed dating events hosted by actual dating companies are held in bars described as ‘suited for the classy professional‘ which suggest that, yes, I would get a proper four minutes seated with each guy, but also that all the guys coming round would be respectable lawyers who played golf at the weekend (and I don’t fancy them).

Don’t bring your sister – One of the guys I spoke to had his sister in tow, and she even whispered to me ‘be nice to him‘! I don’t have any siblings but I’d like to think I’d leave them at home if I did (like I did with all my real family members).

It’s fun – Despite the likelihood that you probably won’t meet your future spouse this way, speed dating is fun and I would encourage everyone to put it on their ‘single person bucket list‘ (please tell me I’m not the only person who has one of those?).

And because this is primarily a fashion/beauty blog, here is what I wore: 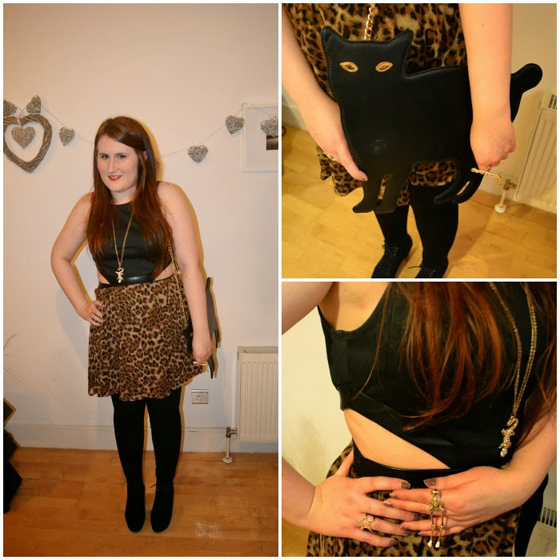 It took me until 2am to spot that I had worn a cat shaped bag to the Cathouse. And I got drunkenly amazed and giggly about it.

And now I’m away to take my very obvious coolness on my next attempt to snag a date (in a veggie restaurant/bar).

To read more from Morag, check out her blog Mo’adore here. And don’t forget to follow her on Twitter for all the latest 3 Dates 3 Months news!