It’s time for another third and final 3 Dates 3 Months challenge *sob*. Beauty and lifestyle blogger Morag, aka Mo’Adore tried speed dating and veggie dating, now she’s moving on to online dating. Read on to find out how she got on… 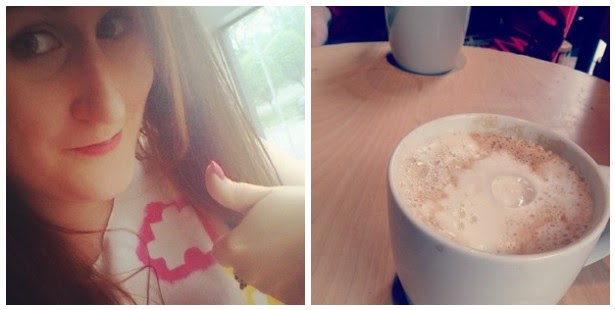 Somewhere in February I mentioned that I was partaking in a challenge with JustSingles.com called #3dates3mths where I had to get creative with three ways to find a date. Since then I have been speed dating in a nightclub with Blink 182 fans and guys that appreciate a girl who wears Converse on a night out. Then we had that time I went to yet another night club, but this time it was a vegan café during the day in an attempt to bag myself a hot, single and straight vegan man.

But now I have the final challenge, which was to find love through the JustSingles.com website. And just yesterday I went for an actual date with a guy I had been speaking to online (we’ll call him Eric, which isn’t his name but privacy and such – I slyly answered the ‘what do you like to do?’ question with netball, food and gigs rather than ‘Well I narrate my life on the internet and tomorrow I SHALL BE WRITING ABOUT YOU!’).

Like a lot of people and their ego I’ve always found online dating a bit, well, yeah. Despite having met some very close friends through the world wide web the idea of making up a profile that essentially went ‘I’ve given up hope finding love within my social circles so I’m going to do it on my laptop instead‘ didn’t feel very ‘me‘. I like being single and believe it’s a magical time for self-discovery, filling you time with 300 hobbies and starfishing on one’s bed. There’s much worse things in life than being single and I’ve never actively looked for love.

But hey, I’m a ‘try anything once‘ gal and this sounded like fun. Unlike my other challenges this one didn’t involve a nightclub (though a nightclub is a perfectly acceptable venue for a date imo) but instead we met up for a simple coffee (Starbucks on Buchanan Street for particulars). A trip to Starbucks wouldn’t make my heart flutter if I was going a date with someone I was already acquainted with but for a date with someone I only knew through my Plusnet connection it was simple and non-committal. If I decided after 10 minutes I’d rather be in bed nursing my hangover, I could down my latte (soya milk, shot of caramel) and mutter something about my leg hurting because I had drunkenly fallen down some steps in The Garage the night before and needed to rest my leg (which I wish was a pathetic excuse, but this really happened on Saturday night). But if I felt we were clicking I could order some other fancy coffee and agree to head out for some proper date activity.

Truthfully, I decided after an hour to nurse my hangover back my flat (alone). But I didn’t quickly down my coffee either. We chatted. We learnt more about each other besides what we had written in on our profiles. But Eric and I didn’t click on that level however we still had a good chat about where’s he from (Spain, which I didn’t realise until we met, his name – both Eric and his real one – didn’t suggest anything non-British) and how much I loved eating. He was still a nice chap who some other singleton should be happy to go for coffee with. He wasn’t creepy. He wasn’t desperate. And I’m still alive. He was a perfectly normal bloke. (My biggest fear about online dating was my impressive ability to attract the weird ones).

Whilst this date won’t be prompting my mum to start eyeing up hats in Marks & Spencer’s, I’m now a lot less cynical about the whole internet dating thing. If you’re looking for something real then I’ll let you know that about 90% of the guys I came across were seriously looking for something special, and very few were looking for a casual encounter. I’ve spoken to three other guys aside from Eric who were all after a real romance and I haven’t received one perverted slur in the three months I’ve been on the site.

This post does conclude the #3dates3mths challenge but I actually have the account until later in the summer and will continue to roll with it, so you never know guys, I might eventually be back with a further update further down the line.

We’d like to say a huge thank you to Morag for taking part in the 3 Dates 3 Months Challenge. We’ve loved every minute of it! To read more from Morag, check out her blog Mo’adore here. She’s also on Twitter, go say hi.