Earlier in the week, 3 Dates 3 Months challenger Charl (aka Ginger Girl Says) talked about her reasons for taking on the challenge. In her latest post, Charl talks about searching for a date on JustSingles.com… 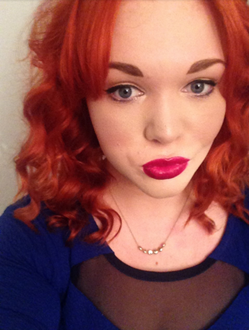 I’ll put my hands up.  I didn’t have high hopes for the “online dating” part of the challenge.  I’ve done internet dating before and they all ended pretty spectacularly where I’ve either sworn off men forever or declared that everybody on the internet is a weirdo.  Except for me.  (or you who’s reading this post).

First off, I didn’t really want to play the internet dating field.  I’m very good at multitasking, I can apply mascara, eat my tea, talk on the phone and tweet without even breaking a sweat, but if there’s one thing I can’t deal with its multitasking men.  I’d be a juggling and double booking nightmare if I had to date “the american way” (think Charlotte in Sex & the City) so when it came to taking on part 1 of my 3 part challenge I decided to focus on trying to find one guy who fitted my requirements for “Mr Darcy”:

Handsome, all of his own teeth, the ability to write in sentences, knows how to use a comma and full stop, down to earth, not a murderer, preferably a hairy chest but not essential.

Setting my sights high, as you can see.

The guy I messaged looked a little out of my league.  I know we shouldn’t really say people are out of our league and if a friend were to say she thought a guy was out of her league I’d slap her round the head, but sometimes there are limits to which we can aim without being mercilessly shot down/laughed at.  David Beckham is one of those people.  When I say that this guy was out of my league what I mean is that when showed a friend a picture of him she responded with “WHAT? Is that Danny Dyer?”  Danny fackin Dyer.  Handsome?  You got it.

After an ice breaking message and fully bracing myself not to receive a response, he replied.  I replied.  He replied.  I replied.  There was a banterfull exchange of messages throughout the evening and through to the next day until eventually, we swapped phone numbers.  I’m a big believer in getting to know the person behind the screen before approaching the idea of a date.  I’ve made the mistake of not doing this before and massively regretted it as my date and I sat awkwardly nursing a drink whilst he refused to laugh at even my most witty of tales (and my tales usually guarantee a laugh even from the most miserable of people).

I usually suggest a phone call to ascertain if the gentleman in question has a) a voice like Joe Pasquale b) a laugh like Janice from Friends and c) whether they can hold a decent conversation.  My first phone call with Danny Dyer* lasted for over 2 hours and speaking to him just seemed so…easy.  After the first couple of minutes of realising he spoke and laughed like a normal human I was pleasently surprised by how much we had in common.

It was after that phone call that he sent the message:

After the initial belly rumblings that the word “dates” induces, I agreed that yes, a date was most definitely on the cards (he was handsome, funny, intelligent and a self confessed movie geek – why would I say no?).  He suggested we go on a date “after a week” of getting to know eachother and allowing the possibility of the 7 day “you bore me now” itch to set in.  Pretty sensible.  The 7 day itch never came and we spent most of that week exchanging texts followed by an hour on the phone swapping anecdotes and learning about one anothers likes and dislikes (likes: Man United & cooking,  dislikes: spiders & seafood).

The first date? We settled on a “non date” type of date after I shared my extreme hate of dating with him on the phone one night.  A quiet drink where we could see whether we could recreate the same sort of buzz in person as we did on the phone.

What if we don’t get on as well in person as we do on the phone?  What if we’re the Carrie and Berger of Stoke-on-Trent where they just choke when it comes to that crucial moment?  What if he pulls a stupid face when he laughs?  What if he was let down by my perfectly angled selfie profile pictures and thought I was more “Honey Boo Boo’s Mum” than scarlett haired, pouting vixen?  What if, what if, what if…

A gulp of wine, a slick of red lipstick, a pep talk in the taxi from Hannah (the taxi driver even wished me good luck!) and ten minutes after our agreed meeting time of 7pm (fashionably late), a week of dating foreplay was about to become real life.

So what happened?  A lady never kisses and tells.

(or maybe I’ll save that part for a post somewhere down the line.  Probably entitled, “Why Having A Perfect Date Doesn’t Always Equal Happily Ever After”.)

To read more from Charl, check out her blog Ginger Girl Says here. Or, go follow her on Twitter!