3 Dates 3 Months new girl Amy (also known as Cocktails in Teacups), talks about why she decided to take on the challenge…

“Twenty something girl from the north, would like to meet a twenty something guy. Preferably with dark hair, eyes and a winning smile. Great sense of humour is necessary. Must be okay with the fact she sings badly to Disney and show tunes while doing the housework, bonus if he would try to join in. Must like nights in more than nights out, Chinese food, traveling and doing the washing up (because she doesn’t).” 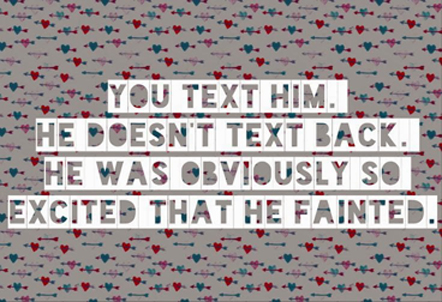 After almost two years I finally feel ready to return to the world of dating. The scary world of dating that is and to help me with this I’ve agreed to take part in the #3Dates3Mths challenge with Just Singles. I’m no stranger to online dating, I’ve tried it a couple of times after encouragement from friends but I just never stick at it, and I think because until now, I’ve never been ready. Now, I think I am. I’ve put all my issues from my last relationship into a brown papered box and tied it up with string. Then I set fire to it. It’s time for a new beginning and it’s time for hope to return.

The three dates, three months challenge is simple. Each of us challengers have three months to try three different ways of finding a date. One of these has to be online dating using Just Singles. My other two are a music night in my home town and a walking tour of a near by city. Loads of fantastic bloggers are taking part and you can follow their progress on the Just Singles Blog. I was introduced the other week as the New Girl. I liked being the New Girl, not just because of the Zooey Deschanel connotations, but also because being the new girl is usually lucky for me. And I think what I need more than anything on this challenge is a little bit of luck.

I never thought I’d be using a blogger challenge to throw myself back into the dating ring, but at the same time, it seemed like a fun and interesting way to reboot my search for Prince Charming. As I’m just dipping my toe into the dating pool for the time being, rather than hoping every guy is my Happily Ever After, I need to be able to let go and have fun. This isn’t something I’m known for, in fact, usually I’m the complete opposite which is probably how I’m not a twenty five year old single mother stranded in her home town. The first guy to say those three dreaded words and I’m sold, hook line and sinker. But I think I’ve finally learned my lesson, I think last time I was so incredibly burned I need to have a more carefree approach to finding love. And I definitely need a proactive approach, I don’t think anyone is going to be able to meet me when I keep myself holed up on a regular basis!

I have to be more careful these days now I have Little Miss to factor in. She’s always going to be the most important thing in my life. I am done meeting men who have no interest in seeing the real me. I think I’m too old for that way of meeting men anyway. The ones who give the once over with their eyes in the club and that is all they care about. What they see. That isn’t who I am, and if you want to be with me, you should probably know…

I say the wrong thing, even when I try to think of the right thing to say, it comes out wrong, especially if I’ve had a drink or I’m attracted to you. My hair never lies right and my make up always looks terrible a mere five minutes after putting it on. I pretend I’m jaded and bitter about love but it’s a lie. I’m a self confessed hopeless romantic. I have a warped sense of reality, I read so much that I have no idea where fiction ends and reality begins, even at almost twenty six. I laugh, smile and make jokes at inappropriate times, especially if for some reason I’m trying to be defensive. I cry a lot. I cry when I’m happy, when I’m sad, when I’m afraid, lost, angry or alone. I like Disney a lot, and fantasy in general but not to the scary geeky point where I wear elf ears on a regular basis. I like music quotes and movie quotes. I talk in my sleep and I’ve been told I steal all the quilt. I like to cook for two (or three these days) and I’m pretty good. I promise I won’t poison you…  I have a bitchy side, I really can’t help it but I’m good with money and I’m not bad at keeping my life together. But I’m damaged, and I need you to hold my hand.

I’m not looking for a guy who has a fast car or lots of money.. but if you do have a car I love to sit in the passengers seat with my feet on your dash singing obnoxiously along with a mix tape. I don’t want you to be into football, or many sports at all.. I’d prefer you to like books and music. Then maybe we could have a real conversation. I’m a sucker for a musician or an artist.. At the very least know how to pronounce Merlot properly, please. The sexiest thing a man can wear is a pair of Converse All Stars, I can assure you I’m already yours. Fight with me, argue, show you have an opinion. I was brought up being taught that being able to fight your corner was not a bad thing. It shows you have passion for something, and I like passion. I’m passionate, in love and in life. You need to be too, as I know I’m capable of walking all over you. I need a guy who’ll keep me in my place, I’m a bitch otherwise and I’d hate to end up wearing the trousers, because I don’t even wear trousers that often! Fight for me. Please show me chivalry isn’t dead. If we have a fight show up at my door, at midday or midnight, it doesn’t matter. You don’t even have to say you’re sorry because as soon as I see you on my doorstep, I’ll melt and say it first.

What is love anyway? I constantly meet men and they ask for my number or kiss me before they should. I don’t feel anything for them, and if I do reciprocate as they wish me to it’s because I’ve drank too much vodka… and then the men I do like, the ones that give me butterflies and when they text me it makes me day so much better and their smile just makes me melt, they never like me back like that. So what happens? Do I just keep kissing all these men until I find one who is everything I’m looking got and I have to hope that he feels that way about me.. Is romance slowly dying? Or maybe it’s just me..

I’m not looking for love straight off the bat. But I am looking for someone who can make me smile and wants me to fall for them. Wish me luck and watch this space!

To read more from Amy, check out her blog Cocktails in Teacups here. Or, follow her on Twitter for all the latest #3dates3mths news.